The Boulware IDEA Place, located in Woodard Hall, has been completely renovated thanks to a donation from alumnus Doug Boulware and his wife
Sandra, making the connection between Tech and A.E. Phillips Laboratory School grow stronger physically.

The idea stemmed from the Boulwares, who developed a relationship with College of Education Dean Don Schillinger and Emily Kabbes, COE
director of development. Doug Boulware said during a tour, he noticed a space that could use a little revitalization. 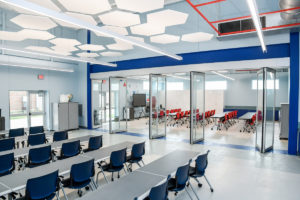 “As Dean Schillinger was explaining his vision for the space, he had an architect there with plans,” Boulware said. “After reviewing the plans and listening to Dr. Schillinger’s idea about creating an innovative, shared space for engaging in high-quality instruction of K-college students, STEM exploration, and professional development. Sandra and I looked at one another and made the decision on the spot to donate the needed funds for the project.  I remember on our drive home how good we felt about our decision and our excitement in seeing the building transformed.”

Boulware said he and his wife, who is not a Tech grad but an educator and emotionally connected to the COE work, are grateful for Tech’s small school atmosphere that they offer to students.

“I got to know my professors personally,” Boulware said. “I’ve said that I may not have made it at other institutions where the class sizes were much larger and the faculty not so caring. That is the reason we want to give back, to help continue to promote that environment.”

Boulware, who now owns Priority Management, which oversees 27 long-term care facilities in Louisiana, said he was impressed with how the COE used his donation and for the student engagement for the renovation.

“As an alumnus, I was surprised how far the College of Education was able to stretch each gift we have given them,” he said. “There is no wasted investment from my perspective, and I’m making that statement from experience in past building projects of my own where I’ve felt as though money was not used in the best possible fashion. This has not been the case with any contribution I have made.  You will be a part of each project you contribute to at Louisiana Tech as much as you choose to be, and their gratitude is overwhelming.”

“For a class with me last summer, she wrote a grant to the Louisiana Nursery and Landscape Association for $3,500 and was fully funded,” Jackson said. “So, not only did my PLSC 301-Landscape Design and Contracting class get this experience and recognition, but Kelsey also learned how to write a grant proposal and actually received funding. She was a huge part of this process. I am grateful for how it all began and ended with collaboration with the COE.”

Students from Jackson’s plant science class helped with the landscaping element of the renovation. Jackson said the students knew that the project they were working on was not only important but would have lasting impacts.

“I am always amazed at what students are able to create if you give them an opportunity,” Jackson said. “Designing, preparing and planting a site in a single quarter is hard to do given the time constraints. The physical work was done during our lab periods on Monday afternoons. The turfgrass was removed with a sod cutter and placed on the west side of Woodard Hall in the hope it would grow there come springtime. Bedding soil was delivered to the site with a dump trailer by a contractor, and the students shoveled it onto the planting area. This provided good soil for root establishment once plants were in the ground. After two different trips to nurseries in north Louisiana, we had all of the plants we needed – pineapple guava, rosemary, dwarf magnolia, loropetalum, abelia, sasanqua camellia, dwarf butterfly bush, dystilium, and Chinese holly. Everything was planted in two lab periods. The area was mulched and covered with pine straw and watered in to help with root establishment.”

Jenny Blalock, principal of AEP, said the space is beautiful and full of light.

“It is nice to walk into Woodard Hall and see our Bullpups learning and walk right down the hall to professors that collaborate and support us,” Blalock said. “It’s a visual representation of the collaboration between the College of Education and A. E. Phillips.”

Jackson said he would love to see his students collaborate on a future project of this nature.

“I could see another project like this happening in the future,” Jackson said. “The main requirement is funding. The expenses are more than some may realize. Renting a sod cutter, pine straw, container nursery plants, and bedding soil add up. With funding, it is possible.”

COE Dean Don Schillinger said this project could not have been completed without help from the Boulwares.

“The renovation of the Boulware IDEA Place has been an extraordinary project from beginning to end,” Schillinger said. “It was very rewarding to embark on an important endeavor like the revitalization of the IDEA Place with such generous and loyal friends like Doug and Sandra. Also, I am very grateful for the many Louisiana Tech University and off-campus partners who collaborated to create a truly amazing space, providing incredible benefits for our college and A.E. Phillips. The project will result in academic rewards and positively impact our region’s economic and workforce development for years to come. To all the many people who came together to make the new IDEA Place a reality, we are thankful.”