This is the third article in a six-part series highlighting academic programs at Louisiana Tech University that are having significant impacts on the region and whose graduates are contributing to the growth of the economies, communities and competitiveness of north Louisiana. RUSTON, La. – The courses taught in Memorial Gymnasium at Louisiana Tech University before 2003 focused on team sports and recreation – most prepared students to become physical education teachers, coaches and recreation workers. That year, the name was changed from the department of health and physical education to health and exercise science. Today, it is called the department of kinesiology and it now prepares students for a broader range of careers related to human movement and health. 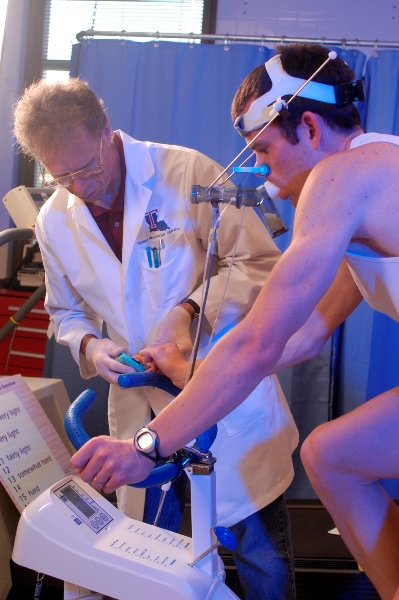 “In kinesiology, we study human movement from a variety of perspectives – biomechanical, psychological, physiological and sociological, across all those disciplines,” said Lanie Dornier, head of the department of kinesiology. Courses now taught in that same space also train for careers as fitness instructors, personal trainers, physical or occupational therapists, physician assistants, cardiac rehabilitation professionals, sports massage therapists, and strength and conditioning coordinators for sports teams among others. She said the move from a focus on traditional physical education to a broader perspective looking at human movement across several disciplines was due to a change of direction in healthcare research. “The big change came in healthcare moving from treating people after they got sick to treating them before they got sick,” Dornier said. “A lot of it was tied to the fitness boom of the 1970s. We started learning more about the benefits of aerobics and fitness.” She said Louisiana Tech’s program is three-pronged focusing on allied health, physical education, and wellness and fitness. There are two bachelor of science degree programs in the department of kinesiology – health and physical education, and kinesiology. Dornier said the degree in kinesiology has two concentrations with health and clinical tracks. She noted the health emphasis prepares students for work in the health and wellness professions, which has been fueled by the need for physical fitness. “We are an overweight society,” she said. “People are looking for professionals to help them stay fit. She said companies are hiring people to help train employees on how to stay fit. “Employees who work out are sick less often, they enjoy work more, they are less likely to drop out or quit their job and they are healthier,” she said. “Major corporations now have fitness centers as part of their environment.” Dornier said the most popular concentration in the department is pre-allied health. Many Louisiana Tech students in this area go on to programs such the one at LSU Health Science Center in Shreveport that prepares for degrees in physical therapy, occupational therapy and physician assistants. She said the Louisiana Tech degree has all the prerequisites for those programs. Generally, they are two- or three-year programs – some at the master’s and doctoral levels, Dornier said. Community service and engagement is also an important part of the kinesiology program and the development of its graduates. The department recently received the KEYS Champion Award from Lincoln Parish for volunteer work with Ruston Junior High students. The KEYS (Keep Encouraging Youth to Succeed) Award is given to businesses, groups or organizations who establish a partnership school initiative sustained throughout the year. Rhonda Boyd’s Kinesiology 406 Health Aspects of Aging class recently hosted Winter Games – a service learning project in which students provided local senior citizens with an opportunity for entertainment and exercise through activities such as hula hooping and tossing beanbags. Dornier said the kinesiology department has an enrollment of about 400 and graduates about 30 students a year in all three programs with one-third going into allied health. The department also offers a master of science degree with concentrations in administration of sport and exercise, and sports performance. Dornier said the master’s degree in administration of sports and exercise concentration is designed for students whose primary interest lies in management positions in fitness or sports facilities. The sports performance concentration prepares for careers in sports organizations to help athletes improve sports performance from a biomechanical, physiological and psychological perspective. The graduate program in kinesiology is what attracted Jeff Albert to Louisiana Tech. “I really went to Louisiana Tech because I wanted to work with Dr. (David) Szymanski,” said Albert, the hitting coordinator for the Houston Astros. “I found out about the baseball research he was doing there.” The 2008 Louisiana Tech graduate said he and his wife struggled with the decision to come to “little Ruston” to study kinesiology after having lived in much larger cities. Armed with a bachelor’s degree in finance from Butler in Indianapolis, Indiana, Albert came to Louisiana Tech and completed his degree in five quarters. “I got a ton done in a short period of time,” the Rochester, New York native said. “I came in and did a lot of things. I knew what I wanted to do and the way the program was setup allowed me to maximize my time.” Erik Beiser was also attracted to Louisiana Tech because of Szymanski’s research in strength and conditioning. “There is no one like him in the world,” said Beiser, minor league strength and conditioning coordinator for the Minnesota Twins. “He is the best strength and conditioning researcher in the nation. That is why I went to Tech.” Beiser said Louisiana Tech’s program in kinesiology has a good balance of theory and practice. “Working one-on-one with Dr. Szymanski helped me gain professional experience,” said Beiser, a 2011 graduate. “He gave me a lot of responsibility with the baseball team there. Dr. Szymanski lead me to where I want to be.” Written by Reggie Owens – regowens@latech.edu