Reprinted with permission of the Monroe News-Star – Written by Hannah Baldwin (11/26/2016) http://www.thenewsstar.com/story/news/2016/11/26/clinical-residency-aims-change-teacher-training-louisiana/94075642/ Fourth-graders crowded around small, laminated cards stuck to the backs of chairs, sides of desks, cabinet doors and shelves around their classroom at Sallie Humble one Thursday morning early in November. The cards bore questions about the animal kingdom — how to tell whether an animal is a vertebrate or invertebrate and which mammal lays eggs, for example. 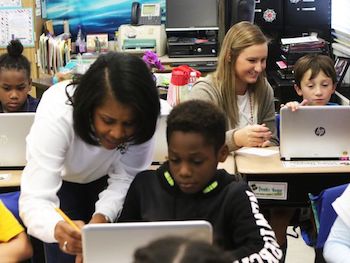 Angela Byrd, foreground, and Kerrigan Pettis, background, help third grade students learn to use an online math program at Sallie Humble Elementary in Monroe on Tuesday, Nov. 15, 2016. Byrd, who is in her 30th year of teaching, is Pettis’ mentor. Pettis, a senior at Louisiana Tech, is one of three clinical teaching residents at Sallie Humble, spending the entire year co-teaching with Byrd, rather than only spending 12 weeks in a traditional student teacher program. – Photo Courtesy of News-Star.