Home › Education › Dogs with A Cause inspires students to read

Dogs with A Cause inspires students to read

Reprinted with permission of the Ruston Daily Leader – Written and photographed by Derek J. Amaya (12/21/2016) – https://rustonleader.com/node/74065 — NOTE: This two-part article is about Dogs with A Cause, a partnership between Louisiana Tech University’s College of Education and Athletics Program, benefiting third- through fifth-graders at Ruston schools. — Ruston third- through fifth-graders recently received a surprise chance to not only read and discuss books with Louisiana Tech University athletes, but also learn from the athletes what it takes to be a college student. 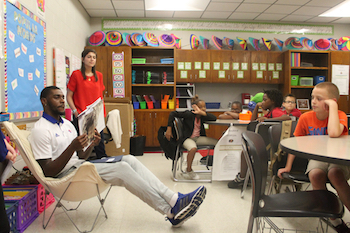 Dogs with A Cause is a partnership between Tech’s College of Education and its athletics program that brings athletes to the classroom to help build the necessary skills in education, said Amy Vessel, director of Tech’s Clinical Residency Center. The program started after Tech’s men’s basketball coach Eric Konkol mentioned to Temple Baptist Church College Minister Casey Casady how he wished there was a way to plug his team into the community. “In the past, I’ve always tried to find opportunities to get my team involved in the community, work with one another as a team to bond with the public,” Konkol said. That is when Casady recommended speaking with Vessel. After only a few hours, Dogs with A Cause was developed combining the College of Education’s clinical residents and the Tech basketball team. Their first stop: Ruston Elementary School. “We wanted to start small, so I suggested the team adopt Ruston Elementary (Teacher Educators and Mentors) Model clinical residency site,” Vessel said. 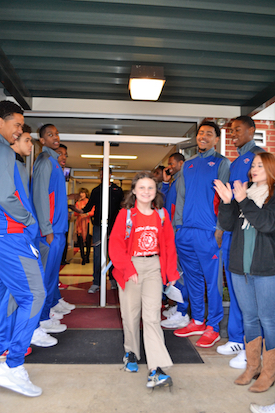 Ruston Elementary School fifth grader Georgia Casady walks through a round of applause from the Louisiana Tech University’s men’s basketball team after completing the day’s activities with Dogs with A Cause.

The “unique collaboration” between the College of Education and Tech’s athletics department allows the residents to switch roles and serve as mentors to the athletes as well, Vessel said. Once a quarter, during the last hour of the day, all 30 elementary residents mentor the student-athletes in the classroom. Under the direction of Vessel, the residents developed their own Dogs with a Cause Character Building curriculum, Vessel said. The curriculum consists of award-winning children’s books and a questionnaire to engage the students with the athletes on what they learned from the book, said Kristen Seal, president of the clinical residency program. “But when you see the students’ faces when the players come in, they’re just in shock,” she said. “These athletes show the kids what hard work and determination gives you.” Ruston Elementary principal Amy Brister said the program is a great way to connect with the community and the kids love to see the basketball team — especially seeing how tall they are. “They’re just enamored with them,” she said. “But I think having the basketball team gives them the opportunity to see others who wanted to go to college, get experience and love to read.” Currently, only Ruston Elementary and Cypress Springs Schools are participating in the program, Vessel said. The basketball team adopted Ruston Elementary and Tech’s baseball team agreed to read at Cypress Springs Elementary. “It has been a wonderful way for the College of Education to collaborate with our own athletic program and share the hard work that goes into teaching children in the classroom,” Vessel said. “I think this has been an eye-opening experience for these athletes.” The future of the program looks bright as both Vessel and Konkol said they would like to see the program expand. With most of the athletics programs on board, that dream looks to be a reality soon. PART II: Louisiana Tech University’s College of Education’s Teachers, Educators and Mentors Full-Year Clinical Residency Schools span over 11 schools in three school districts in the North Louisiana area. As the model continues to grow across that Interstate 20 corridor into new school districts, so too will the vision of the Dogs with A Cause program, said Amy Vessel, director of Tech’s Clinical Residency Center. Dogs with A Cause is a partnership between Tech’s College of Education and its athletics program that brings athletes to the classroom to help build the necessary skills in education. Currently, only third- through fifth-graders in Ruston city schools and Tech’s men’s basketball and baseball teams participate in the quarterly event. However, the program looks to expand within Tech’s 16 athletics teams training with the program’s clinical residents and their curriculum set in place for Dogs with A Cause. “Hopefully, through the watchful mentoring of the elementary clinical residents in a co-teaching environment, teams will have the opportunity to establish lasting partnerships between the athletes and their adopted students,” Vessel said. “The impact these college athletes can have on the students of Lincoln Parish are endless.” Dogs with A Cause is providing opportunities for senior clinical residents to develop character building curriculums while also giving back to the community and empowering residents to reach their potential from planning to teaching to mentoring local athletes, Vessel said. The program’s goal is to grow by two athletic programs each year while also developing a three-year curriculum to be used. “After three co-teaching experiences during the first year, these athletes will be well coached to visit their adopted students solo in the second year,” she said. If this pattern follows according to plan, all 16 Tech athletics teams could be aligned adopting a TEAM Model school by 2023-24 academic year, Vessel said. “If we have learned anything from the past two years of piloting our clinical residency program, it’s that starting small and spending quality time building relationships is key to a program’s success,” Vessel said. And with the expansion of the number of TEAM Model schools from three schools in 2014-15 to now 11, Vessel said the residents are excited as well as a bit overwhelmed at the possibility of the programs future. However, the teams are excited at the prospect as well, especially the men’s basketball team, said Eric Konkol, Tech’s men’s basketball coach. “You know there is plenty of potential in this program,” he said. “I want us to go around the community and engage with students from all sorts of different backgrounds. As a thank you for the students participating at the men’s basketball team’s adopted school, Ruston Elementary, the students received tickets to attend the game against LSU-Shreveport today with their families. “We know they’ll be excited,” he said. The next phase of the program is seeking funds through grants and donors to support the cost of children’s literature and curriculum materials needed for school visits, Vessel said. As for Tech athletics, the number of hours of service in the community will increase dramatically over time with a chance to be spotlighted on a national level for its work mentoring in the community. In fact, a national education organization has already invited a national platform to Tech’s Clinical Residency Center to share its collaborative endeavor. “Every time someone outside the College of Education has the opportunity to walk in our shoes as teachers, it raises the prestige of our profession,” Vessel said. “Listening to the athletes react and reflect after each event is heartwarming and inspiring for our program. Tech athletes and coaches are directly exposed to the rigorous challenges of being a teacher.