Editor’s note: This is the first in a series on Louisiana Tech University Winter 2018 graduates. Commencement will be held at 10 a.m. Saturday, March 3, in the Thomas Assembly Center. 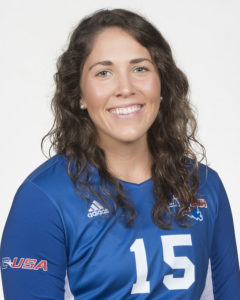 One afternoon during her freshman year at Louisiana Tech, it all “kind of clicked” for Jacie McClure. The daughter of two athletic parents and coaches, she’d come to Tech from St. Joseph’s Academy in Baton Rouge to play volleyball and study physical therapy. But in study hall this one afternoon, an administrator’s children needed help. “I was working with them and playing with them and all of a sudden I knew I wanted to be involved in pediatrics,” she said. “It was a real ‘light bulb’ moment. “The same quarter, we were writing a paper in one of my classes about what we were going to do in our profession, who we were going to help,” she said. “I started really researching pediatrics. Being in the rehab department of a children’s hospital is something I really got excited about.” She’ll graduate with her kinesiology and health promotion degree at Tech’s 2018 winter commencement ceremony. In the spring quarter, she’ll remain in Ruston, coach some volleyball and “enjoy being an adult before I get to ‘real’ adulthood,” she said. Her first step there will be working as a physical therapy technician in Baton Rouge while she waits to see where she’ll be accepted into PT school. That shouldn’t be a long wait: McClure made the President’s List every quarter at Tech, has a 4.00 GPA, and this spring became only the 15th student-athlete in Tech history to be named an Academic All-American; she’s one of only 21 players on the team. “My mother left school early in Baton Rouge when she found out, drove up here that night and brought me balloons and flowers,” McClure said. “I had always worked hard and expected a lot of myself academically, but when my mom did that, I figured, ‘Wow, maybe this really is a big deal.’”