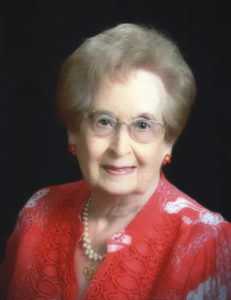 Soon, there will be two Tower Medallions in the Virgil and Myrtis Orr household in rural Lincoln Parish. Louisiana Tech University’s Alumni Association will welcome Myrtis Orr into its Hall of Distinguished Alumni during Winter Commencement at 10 a.m. Saturday in the Thomas Assembly Center. She’ll also be awarded the Tower Medallion that accompanies this distinction. Her husband of more than 70 years, Dr. Virgil Orr, former vice president for academic affairs for the University and its Alumnus of the Year in 1996, received the Medallion in 1986. Myrtis taught preschool at First Baptist Church in Ruston from 1953 until 1965 when she was recruited by the director of A.E. Phillips Laboratory School to establish its first kindergarten program in 1966. By 1968, she began working with student teachers at the University and became part of the Tech faculty. She maintained this dual role as kindergarten teacher and associate professor until her retirement in 1985. Considering the number of children Myrtis taught directly and the number of Early Childhood student teachers she helped to educate, plus the lives she positively influenced by her servanthood at Temple Baptist Church and as a volunteer in the North Louisiana Hospital Auxiliary, it’s apparent that her reach has been immeasurable. She has been involved in several professional organizations including Louisiana Association for Children Under Six, Southern Association for Children Under Six, and the Beta Beta Chapter of Omicron Nu National Honor Society. After graduating from Choudrant High School in 1941, Myrtis Chandler attended Louisiana Polytechnic Institute and earned a Bachelor of Science degree in home economics in 1944. Immediately after graduation, she married her Tech classmate and became Myrtis Chandler Orr. About the Hall: Established in 1976 by the Louisiana Tech University Alumni Association, the Hall of Distinguished Alumni honors those alumni of the University who have distinguished themselves by exceptional achievement, community service, and humanitarian activity. The award recognizes those exceptional individuals who have brought honor not only to themselves, but to the University as well. Permanent recognition of those members of the Hall of Distinguished Alumni is housed in the Marbury Alumni Center on the Tech campus. Members of the Hall receive the Tower Medallion.