For Maddy Davis, Louisiana Tech is home away from home.

The Mount Pulaski, Illinois, native enters her third year in Ruston after signing an athletic scholarship to play for the Lady Techster volleyball program.

Despite over 600 miles that separates Maddy from her former stomping grounds at Mount Pulaski High School – she led the Hilltoppers to the state title as a freshman – she still opted to travel south for her college education.

“I always wanted to go to a smaller school,” said Maddy, whose hometown of Mount Pulaski (population of 1,514) is where Abraham Lincoln practice law in the mid-1800s. “When I came on my visit, I just loved it here. I love what coach is trying to do here; the culture and program he is trying to build. I thought it would be a perfect fit and that I could contribute really well to it. I just like the people here.”

Through her first two seasons on the court, the 6-foot-2-inch middle blocker has seen action in over 150 sets while totaling exactly 300 kills and 146 blocks (the top mark on the team during that time frame). Maddy exploded onto the scene as a true freshman, recording a program single match record of 13 blocks against Illinois-Chicago. 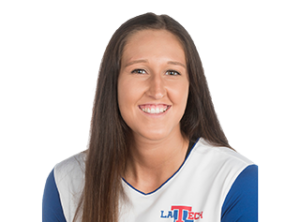 That came in her collegiate debut.

Fast forward two years. Maddy is now focused on the start of her junior campaign this weekend when the Lady Techsters travel to Houston Baptist for three matches.

“I think this year will be a good year,” she said. “We have a lot of new people. It’s a brand new team. We have a lot of pieces. We just have to figure out how to use them together.”

Maddy is a kinesiology major. Her heart is set on becoming a physical therapist once her days as a student-athlete come to a close. That’s where the student part of the equation comes in to play.

She said one of the benefits to being at Louisiana Tech is the relationships she has built.

“I really like the professors,” said Maddy. “Most of my classes have been small. You really get to know your teachers and the students. I’ve made a lot of friends at Louisiana Tech.

“I like Ms. Smiley Reeves. She is always there to help me and tell me what to do. She was my first advisor and has given me direction when I needed it. She is really nice and fun to talk to.”

Reeves, who taught Maddy in Kinesiology 220, said she has developed the utmost respect for Maddy both as a student and a person.

“Although Maddy was not sure what to expect from the class she grew to perform skills with confidence,” said Reeves. “She became a leader in the class that I knew I could count on when needed. Her kind and helpful personality stood out among the class of 50.”

That same personality followed her heart to Tech two years ago. What have been the biggest differences for her in the South?

“The food is spicy here, which I like,” she said. “And you guys kind of go crazy when it snows. I mean we got two days off last year when we got less than an inch of snow. It’s funny.”

And for Maddy, she wouldn’t have it any other way.