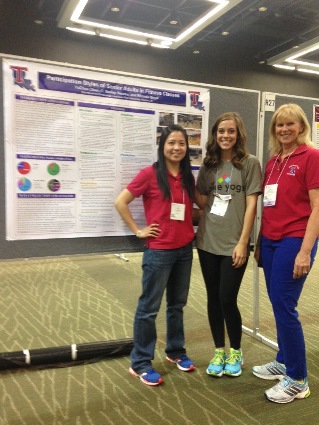 “I had a really great time at the SHPAE America Convention,” said Ward. “It was really exciting to see so much change happening in the health and fitness world, especially in schools. I feel so honored to have had the opportunity to go and represent my awesome university and its kinesiology department. I can’t wait to get back to school and recommend to my peers that they go next year.” Brian conducted a poster presentation titled, “Looking inside the Black Box: Fidelity Assessment of Motor Intervention.” This research describes the processes for how teachers demonstrated physical education/motor development knowledge and implemented an object control intervention with fidelity. She also did an oral presentation on “Early Childhood Girls SKIPing with Preschool Teachers to Motor Competence,” which examined the influence of an early motor skill intervention taught by preschool teachers on the object control skills of preschool girls. Chen and Reeves presented a poster titled “Participation Styles of Senior Adults in Fitness Classes.” Chen also presented a poster on “Ethical Decision-Making Standards of Collegiate Athletes,” which looked at volleyball players and track and field athletes who were found to have higher ethical decision-making standards than football, baseball, and men’s basketball players, while participating in sports. Chen research showed that family members were also found to be the most influential individuals on making such decisions, followed by professional athletes, coaches, friends, themselves and God. “I was very excited for the opportunity to attend SHPAE this year and to present my research with fellow professionals,” said Chen. “It was also good to learn new teaching and research techniques, reconnect with my former professors and peers, and to tour the city of Seattle. Smiley and I were very proud of Jordan at the awards ceremony and Phi Epsilon Kappa breakfast. There were only three representatives from the State of Louisiana and Jordan was one of them.”